In Malaysia, visitors will be surprised to find all of Asia’s main ethnic groups living together in harmony. Indeed, all the world’s major religions are also represented here. An interesting sight in major towns is the proximity of mosques, temples and churches to each other.

This social phenomenon has enriched the shared character, cultural mosaic and vision of the nation.

Mingle with the country’s over 25 million people, consisting of the majority Malays and other indigenous groups including the Orang Asli, Dayaks, Kadazan, Dusun, Melanau, Murut and more. Joining them are the Chinese, Indians, groups of mixed descent such as Baba-Nyonyas and Eurasians of Portuguese and other European ancestry as well as more recent immigrants from Asian countries.

PINANG PERANAKAN MANSION, GEORGE TOWN. Visit Pinang Peranakan Mansion, a cultural center providing a valuable introduction to the Peranakans, a community of wealthy Chinese traders that made this area of the world their home. Set in a restored mansion, the museum's interiors and architecture display the singular style and aesthetics of the community, blending traditionally Chinese aspects with local Malay and, later, colonial British influences.

JONKER STREET NIGHT MARKET, MELAKA. Jonker Street Night Market is the bustling heart of Malacca's Chinatown. With historical buildings dating back to 17th-century Dutch colonialism, the street has long been a center of trade and commerce. Now attracting an international crowd with its antiques, textiles, foods, and souvenirs, the road has adapted to recent global attention with a wide range of bars, cafes, and restaurants added to its mix of businesses. 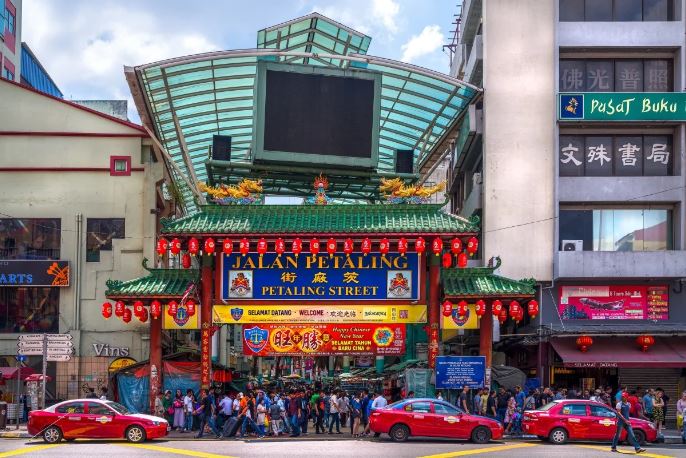 CHINATOWN, KUALA LUMPUR. Chinatown is originally settled by Cantonese and Hakkas drawn here because of the tin trade--and then partially destroyed during an 1870s civil war among Chinese immigrants--today the quarter retains an evocative atmosphere. Locals and tourists alike head here for the abundance of Chinese cuisine, international stores, and market stalls selling an array of trinkets, merchandise, and groceries.

KEK LOK SI TEMPLE, AIR ITAM, PENANG. Visit Kek Lok Si Temple, the largest Buddhist complex in Malaysia. Established at its hilltop location in 1891, the temple harmoniously combines architectural influences from across the region. Its main feature remains the impressive seven-story pagoda and its 10,000 alabaster and bronze statues of Buddha. The ample grounds include separate areas of relaxation and contemplation, with pools, ponds, and well-maintained, peaceful gardens.

CHEONG FATT TZE - THE BLUE MANSION, GEORGE TOWN. Visit Cheong Fatt Tze - The Blue Mansion, a historical building and museum. Built by the Chinese merchant Cheong Fatt Tze towards the end of the 19th century, the house displays influences from the design heritage of his native land, local Malaysian aesthetics, and colonial British style. Its distinctive blue coloration was achieved by mixing lime with the natural dye made from indigo plants, creating a hue popular during the colonial era.

ISLAMIC ARTS MUSEUM MALAYSIA, KUALA LUMPUR. Head to Islamic Arts Museum Malaysia, a celebrated cultural center in Kuala Lumpur's main tourist district. Established in 1998, this modern museum tells the story of Islam in the country, the continent, and beyond, through a range of temporary exhibits and permanent displays. With more than 7,000 artifacts from across the world, the museum's permanent collection remains the largest of its kind in Southeast Asia.

PENANG HOUSE OF MUSIC, GEORGE TOWN. Learn about the melting pot of cultural influences that have shaped the island's musical heritage at Penang House of Music. The highly interactive displays allow you to fully immerse yourself in the world of sounds. Browse through a growing vinyl collection, newspaper clippings, audio and video interviews at the resource center.